When web-based applications first took off, businesses were quick to jump onboard. Today, it’s almost unthinkable for a commercial enterprise not to have a responsive and functional web app. However, tech and times have changed in the last decade and so have customer expectations. While desktop browsing is still popular, more and more consumers are going mobile. For businesses aiming to create hybrid customer experiences, hybrid apps can be a gamechanger. Here, we’ll look at 5 of the most successful hybrid app examples on the market today.

Web applications are programs stored on remote-servers and accessed by users through web-browser interfaces. They’re typically written in web-development languages that support interactivity, design options, and responsiveness like:

Web applications require users to log-in and register via web pages to access their resources and functionalities. They can be accessed either by desktop devices or by mobile devices with a web browser. However, they tend to be constrained by their reliance on web browsers compared to native applications.

Native apps usually have full access to any APIs and features that the developer might provide as service features. These apps are generally written in mobile friendly languages like Swift or Java. This allows native apps to provide superior utility and accessibility, better user experiences, and expanded functionalities through carefully crafted user interfaces. The downsides of native apps are they can be costly to develop and require expertise in mobile device architecture.

Hybrid apps attempt to blend web-based and native app technologies. They offer the utility of web-based applications on mobile devices. While the definition of hybrid app can be fluid, they are distinct from web apps and purely native apps by offering some of the functionalities and features of both.

What does a hybrid app do?

The hybrid aspect of these applications comes from the blending of web app performance with the convenience and portability of mobile devices. This can be achieved by wrapping the web applications in a native app shell.  These shells are typically based on popular open-source frameworks like Ionic, React Native, Cordova, or Flutter.

Having a native shell means that areas of the app can offer similar functionalities to native apps. At the same time, the visible portion of the app that users interact with may function like a browser, allowing integration with the vendor’s web-based application.

With that said, hybrid apps aren’t always a perfect solution. Like most commercial solutions, they come with several advantages and disadvantages.

Some popular advantages of hybrid apps include:


Unlike web or native apps, hybrid apps are limited in their integration with mobile devices. Regardless of the native shell wrapper used, the core web application code is essentially the same. This means that some of the functionalities that users may expect from mobile apps won’t be available.


User interfaces in hybrid apps also tend to be weaker than their native app counterparts. This has to do with the integration of application functionality with mobile operating systems. Where native apps are optimized to make the most of the well-established UI features that exist for mobile devices, hybrid apps can struggle to replicate them in web apps.

Another issue that hybrid apps currently run into is poorly optimized UI and design. This can happen when the web application is poorly optimized to match the design and style guides provided by operating system publishers. For hybrid app developers, it can be costly to develop in line with these design standards and update the app every time those standards change.


As there is a layer between the application and the browser, it’s normal for hybrid apps to show some losses in performance. Hybrid apps tend to suffer from performance issues including lagging animations, longer page load times, and poor responsiveness. While these can be remedied with specialized code solutions or plugins, implementing them can be more costly and drag development out.

Differences in device power and capability can also impact the hybrid app performance. That said, while hybrid apps will never match the performance and functionality of native apps, they’re often good enough for most users’ needs.


The performance of hybrid apps is tied to the user’s browser speed. When connections suffer or the browser is experiencing connectivity issues, hybrid apps can also suffer.

These limitations may certainly pose a challenge for many businesses, but some organizations have found success with their own hybrid apps.

Hybrid apps can often shine as cost effective alternatives to fully native apps. In some cases, they work well as Minimal Viable Products (MVPs) that can be used to justify the investment of resources in further development on native apps.

For larger, more mature organizations, however, hybrid apps are perfectly capable value generators that leverage existing web application resources and extend them to mobile users. Here are some of the most successful hybrid app examples on the market today.

Gmail is one of the most widely used hybrid apps around. Despite starting out as a web-based extension of Alphabet’s Google service family, Gmail now has over 1.5 billion active users spread over web and mobile applications. Gmail’s mobile app (along with many of the Google suite of products) showcases an outstanding hybrid of web application and native level integration with mobile devices.

Users can sync their mobile devices to the web app allowing updates on the go, online and offline accessibility, and the ability to send media directly from device storage. What makes the Gmail hybrid model so successful is its seamless integration with the web app offering all of its popular functionalities like automatic spam blocking, inbox management, support for multiple accounts, and data caching that provides strong usability both on and offline.

Possibly the most popular hybrid app in the world, Instagram boasts over 1 billion active daily users. The app itself however runs almost seamlessly using WebViews to provide smooth connectivity to user timelines and updates. Most of Instagram’s functional areas are built using the popular hybrid framework React Native.

With a dedicated web app powered by HTML5 and a robust mobile app, users have steady access to all the core functionalities of the web app with mobile specific capabilities. What makes the app so popular is its core appeal––the ability to share short videos and images directly from their mobile devices.

The native level integration of mobile device features and assets like cameras, microphones, geolocation, and stored images allows users to share personal media, add their locations, and tag contacts quickly and easily. It also provides a functional offline mode for low-connectivity environments to keep users connected and engaged with the platform.

The social media powerhouse’s mobile app is a great example of a successful hybrid app. With over 217 million active daily users, it’s hard to argue with its popularity. What makes Twitter such a phenomenal hybrid app example is the way it handles the daily volume of users. Using intelligent loading strategies they have been able to improve boot up speed allowing users to access the app quickly and reliably.

Thanks to their creative implementations of service worker caching for current views, feed updates, notifications, messages, and settings, repeat views of the app are near instantaneous with responsive refresh rates. It can also reduce app data usage for mobile users by up to 40%.

As a hybrid app, Twitter also provides accessibility and interactivity with common mobile capabilities. Through the app, users can live stream (or live Tweet) using mobile cameras and microphones, share Tweets with friends, use the functional offline mode, and interact with many of the web application’s most used functionalities.

Leading the e-service movement, Uber made a name for itself with its easy-to-use mobile application. With native-like interactivity and accessibility, it’s easy to forget that in some ways, Uber is also a hybrid app. The mobile app features native level functionality in many areas, but also runs on Uber’s core web application.

Like Instagram, Uber uses a WebView to provide users with interactive maps and streaming data, keeping them up to date with nearby drivers and their ETAs. The native app integrations allow users to share their locations to help nearby drivers find them. This helps reduce user wait-times for service and improves customer satisfaction. For Uber, investing in a seamless and responsive mobile app has been a major factor in their explosive growth.

While Amazon’s popular online store is now available as apps for both AndroidOS and iOS devices, it was one of the pioneers of hybrid app development. Amazon first rose to prominence as a web-based application, but with the growth of mobile device markets, engineers at the ecommerce giant began to extend their services.

Early iterations of mobile applications provided functionality but were slow and poorly optimized. These apps were plagued by long page load times and efficiency issues. By implementing HTML5 based architecture, engineers at Amazon were gradually able to create hybrid apps that were able to offer faster, more reliable service with lower latency. Amazon now uses native-like architecture but integrates mobile apps with their existing web app to provide seamless customer experiences across both platforms.

With the magic of modern hybrid app development solutions, organizations can achieve faster connectivity, better scalability, and more efficient data usage than they could in the past. Many modern hybrid apps now use native app elements to create smooth, responsive UX and UI but derive their functionality from existing web application resources. This allows them to provide near native-level responsiveness and accessibility without breaking the bank or spending thousands of hours in development.

Whether you’re focusing on web, hybrid, or native apps, developing applications for a large userbase relies on a robust and scalable software architecture. High performance architecture has a huge impact on application efficiency, speed, and functionality. They should not only work properly but also be fast to develop and innovate in the long term. Learn more about software architecture in our article here. 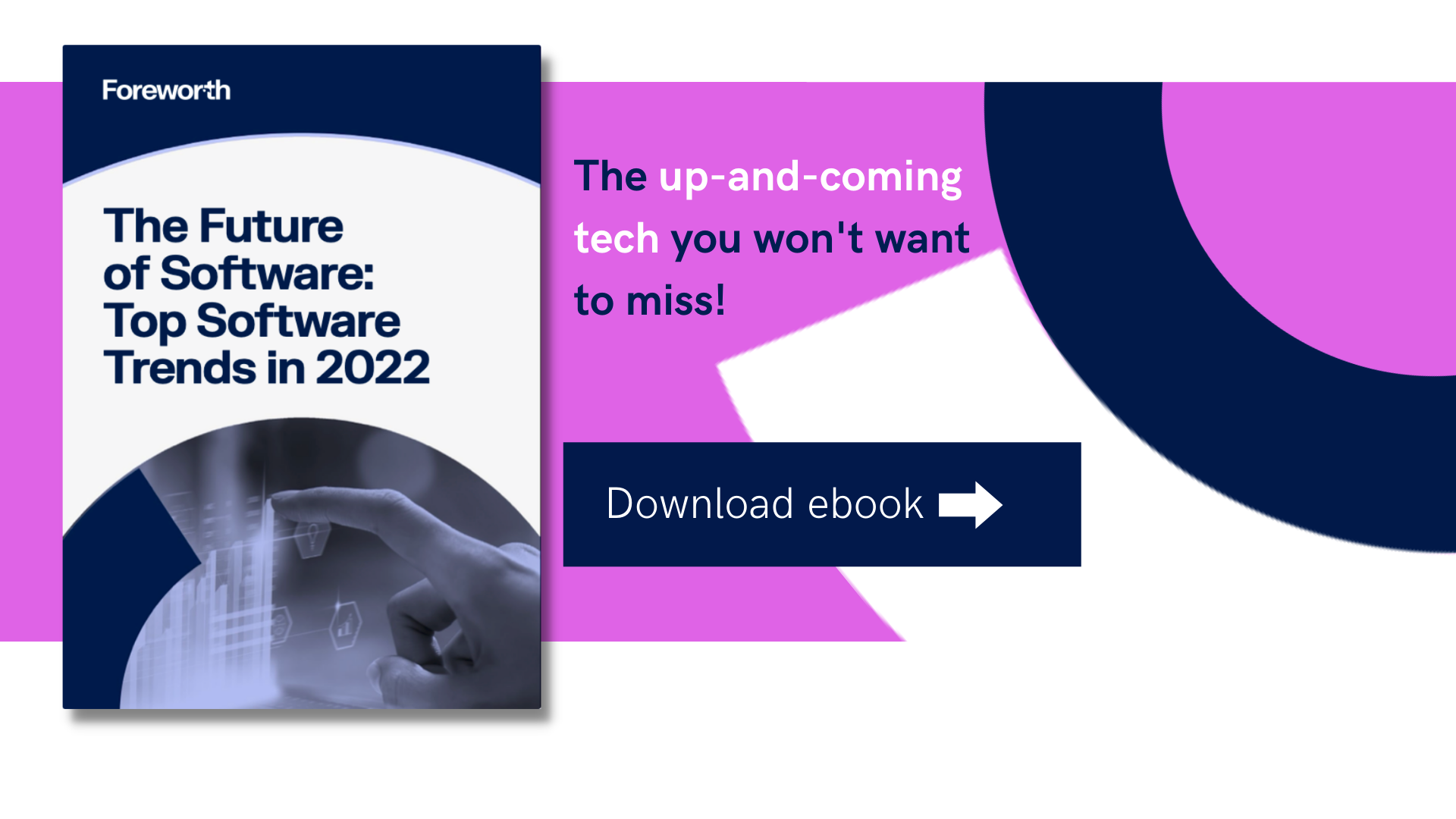